The 51st Engadin Skimarathon again offers the best cross-country skiing and a field of top international skiers. Dario Cologna and Roman Furger among the men and Anouk Faivre-Picon among the women can win the Engadiner for the fourth time. The run has been sold out since the end of January; 14,200 skiers are registered. 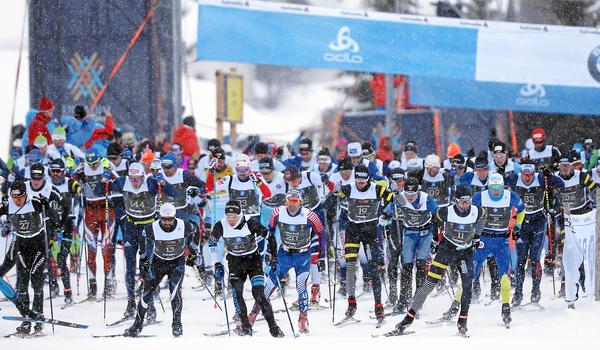 Superstar Dario Cologna has his fourth win at the Engadin Skimarathon in his sights. However, he will face a strong field of opponents on Sunday. Last year's winner Roman Furger also wants to win the "Engadiner" for the fourth time, even though his current form makes this goal questionable.

In addition to the two Swiss, the French and Scandinavians are especially likely to in the running for a victory: Maurice Manificat already has a World Cup victory this winter. Together with Clément Parisse and Adrien Backscheider, who are also competing, he won bronze at the World Championships in Seefeld this season. From the strong French team, Jules Lapierre, Jean Marc Gaillard, Robin Duvillard and Renaud Jay are also top-picks. The strong sprinter placed twice in the top five in 2017 and 2018. Also the Norwegians with Anders Gloersen (winner 2014), Tord Asle Gjerdalen and Chris Andre Jespersen are among the favorites, as well as the 2015 winner in Switzerland, Ilya Chernousov.

The top women have precedence

In the women's race, Nathalie von Siebenthal, who drew attention to herself at the World Championships in Seefeld last Saturday with her 7th place finish of 30km, is one of the favourites. Her strongest opponents include Anouk Faivre-Picon from France, who has already won the Engadiner three times, Britta Johansson Norgen, the untouched leaders of the Visma Ski Classics, Astrid Oyre Slind from Norway and Katerina Smutna, the winner at La Diagonela this year.

For the first time, the elite and elite A of the women go five minutes ahead of the strongest men. "With the separate start for the best women, we want to offer them even better conditions for the competition," says race director Adriano Iseppi. "Skiing in the sometimes very motivated men's field means unnecessary stress for women, and it can also influence the course of the race. Also for the television viewers, the women's race will be easier to follow.”

The Engadin Skimarathon is produced by Swiss television SRF and televised live in several countries. "The new membership in the long-distance series ‘Visma Ski Classics’ gives us much better TV coverage," says Managing Director Menduri Kasper. "We hope that this will increase our awareness in Scandinavia and Eastern Europe. This will bring new cross-country skiers to the Engadin and future marathon weeks. »

Top field for the night sprint from Friday

Last year's winner Even Northug from Norway, the Swedish top sprinter Teodor Peterson and the Frenchman Renaud Jay lead the list of favorites for the Engadin Nightsprint. They compete on Friday evening in St. Moritz Kurpark against, among others, the Swiss Roman Furger and Erwan Käser.

The women's field promises high-class sport: with the previous years’ second-placed Elisabeth Schicho (Germany) and the Norwegians Berit Mogstad and Alnaes Anikkekn Gjerde, there are strong sprinters at the start. The young native of the village of Sent in Canton Graubunden, Fabiana Wieser, will also receive a lot of attention from the audience: last year she placed a surprising third.

Live broadcast on the Internet from 8:15 am

In addition to the livestream and the website, the Engadin Ski Marathon also offers results, commentary and pictures via the social networks Facebook, Instagram and Twitter. At the address www.liveimage.ch you can also see a current picture gallery, which is fed directly from the track by photographers.