Samedan, 10 March 2022. A star-studded Swiss team and several strong contenders from France will try to frustrate Dario Cologna's attempt for a fifth victory at the Engadin Skimarathon. With many top athletes from several countries at the start, all bets are off on the outcome of the female competition. To date, more than 11,200 participants have entered the race, the course is in excellent condition, and the weather forecast gives reason to expect a fast race. 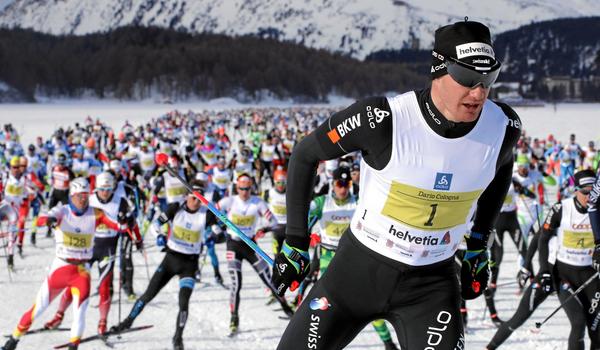 Less than a week ago, at the race in Oslo, Dario Cologna ended his World Cup career with a bang. A record victory at Sunday's Engadin Skimarathon would top off his impressive career. The 42 kilometres from Maloja to S-chanf have always held a special place in his heart. Born in the neighbouring Val Müstair, the world-class athlete crossed the finishing line ahead of everyone else four times already, most recently in 2019 at the last edition of the famed ski marathon. With a fifth victory, Dario Cologna would tie with the unforgotten Albert Giger, who stacked up five wins in the 1970s.

However, pulling off a victory will not be a walk in the park for Cologna. As ever, the competition at the Engadin Skimarathon is stiff, and the Swiss contingent invariably is eager to give their best on home turf. Jonas Baumann, the Swiss athlete with the most consistent performance over the past two seasons, is throwing in his hat, as are Jovian Hediger, who, like Cologna, will be racing in front of an international audience for the last time, Valerio Grond, just turned Junior World Champion two weeks ago, Curdin Räz, winner of last week's Gommerlauf, and Toni Livers, who is showing his best form for the season finale and may yet surprise with a superb run.

The French athletes may yet have the final say on the medal ranking: Adrien Backscheider stood out in the Olympic team, Tom Mancini consistently finished in the top tier at both the World and Continental Cups, Arnaud Chautemps finished tenth at the World Cup Sprint in Lahti two weeks ago, and Jean Marc Gaillard, an old hand at the Engadin Skimarathon, came in second behind Curdin Räz at the Gommerlauf.

The fight for the win among the female racers is not set to be an entirely Swiss affair either. Silje Øyre Slind is arguably one of Norway's foremost long-distance cross-country skiers and among Sunday's top medal hopefuls. She impressively demonstrated that the Engadine terrain is to her liking at January's classic-style La Diagonela, where she came in fourth. Having finished second at this year's Transjurassienne, raced over a distance of 63 km, Elisa Brocard from Italy undoubtedly figures among her most serious contenders. Other international female racers to watch out for are the German veteran World Cup racer Nadine Herrmann and Enora Latuillière from France. The strongest Swiss challenger is expected to be Seraina Boner from Davos (GR). She ranked 6th at the Gommerlauf and 4th at the Engadin Women's Race and raced in the top ten at the Engadin Skimarathon.

It is worth mentioning that the female elite athletes will be starting five minutes ahead of the rest of the field. «By having the top female racers start in a separate group, we want to give them the best possible race conditions,» explains race director Adriano Iseppi. «For the female athletes, racing among the sometimes overly ambitious leading male field causes undue stress and may even determine the outcome of the race. It will also improve the experience for the TV viewers.» Swiss national broadcaster SRF will be producing a live broadcast of the event, which will air internationally.

On Sunday, aside from the athletes, all eyes will be on the new starting format, which will see 29 waves of no more than 500 participants set off in Maloja. Changes have also been made between Pontresina and Samedan: exiting Pontresina, the track crosses a new bridge over to the left bank of the river Flaz. Further down, racers will cross the railway line through an underpass that has been made wider, leading into an extra loop around the picturesque San Gian church near Celerina. Yet another enlarged underpass will lead racers across the Engadine valley's main road onto the flatlands around Samedan airport.

Live broadcast starting at 8:10 am
The Engadin Skimarathon will broadcast live as of 8:10 am on SRF Zwei, the SRF Sports app, and the SRF and the event's websites. The programme begins with images of the starting area and will then show the entire race.

Updates on the race can also be found on both the Facebook and Instagram channels of the Engadin Skimarathon.

Next competitions at the Engadin Marathon Week 2022

Readers can find further information on the 52nd Engadin Skimarathon, the 13th Engadin Half-Marathon, and the 4th Engadin Night Race on www.engadin-skimarathon.ch/en/.

An image gallery is available at www.liveimage.ch, which is continuously fed with images from photographers at the course.