Pontresina, 10 March 2022. Local pro Curdin Räz and Maria Adele Zampa from the Ticino are the winners of the 4th Engadin Night Race. With temperatures around the freezing point, both logged a record track time. The perfect conditions tonight raise expectations for a fast race on Sunday at the Engadin Skimarathon. 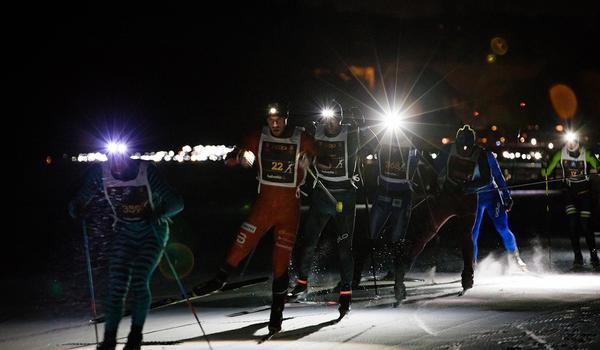 On Thursday, after an imposed two-year hiatus, the starting whistle was finally blown for the Engadin Night Race once again. The perfect conditions of the 17-km-long course from Sils to Pontresina paved the way for new track records in both the male and the female categories. Sils-born Curdin Räz won the men's race in the final spurt in 37.21,1 minutes – a new track record – ahead of Livio Matossi from St. Moritz and Livio Corsini from Lenzerheide. At the finish, Räz was full of praise for the fast course. «The track conditions were perfect, and racing through the woods in the night is just bliss.»

For Maria Adele Zampa, who won the women's race, the race was not quite such a smooth ride. Originally from Ticino but now residing and training in Celerina, the athlete had finished in second place at Sunday's Women's Race. «At the Night Race, I struggled with some of the uphill parts, which I hadn't at the Women's Race,» she said at the finish. «Besides, racing within a group of strong male athletes is a different cup of tea to racing at the front of a women's-only field.»

Nevertheless, Zampa relished the race, just as she enjoys doing her training runs at night, she stated at the finish. Clocking up a bare 40.54,0 minutes, she beat the previous track record by a large margin. In the end, her lead was 2.47,4 minutes, ahead of Fabiana Wieser from Sent and Christa Jäger from Valens (SG).

Thursday's course conditions and the weather forecast augur well for Sunday's Engadin Skimarathon: tailwind and sunny weather with pleasant temperatures promise ideal conditions for the 11,300 plus athletes. Curdin Räz, the winner of the Night Race, is among Sunday's medal hopefuls. «Short of breaking a pole or some other predicament, I feel a top ranking is on the cards,» he says confidently.

Press officer at the event

The logo of the Engadine Skimarathon and free press images (for editorial use only) are available to download at: